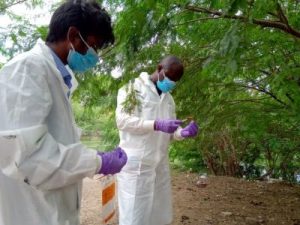 Imagine you’re a public health commissioner in Trichy, a major city in the Indian state of Tamil Nadu. Your city has long been lauded as one of the cleanest in the state, particularly on the basis of safe sanitation.

It’s a typical Tuesday, and you’ve been notified that there is a small, 100-cubic-liter raw sewage overflow near a bus stand. There’s also a massive wastewater spill of around 10,000 cubic liters from a properly operated and maintained treatment center. The wastewater is flowing directly into the river and over open farmland in the Cauvery Delta.

Your budget and resources are limited, and you can only address one of these issues at a time.

Which do you address first?

“Most people would focus on the treatment center – the larger spill – which is wrong,” said Musa Manga, a water and environmental engineer and postdoctoral research associate in the UNC Gillings School of Global Public Health.

Manga and a team of researchers from the UNC Water Institute have been conducting fieldwork in Tamil Nadu for more than five years for a study on the unsafe return of human waste to the environment, a project sponsored by the Bill & Melinda Gates Foundation. The team includes Professor Emeritus Pete Kolsky, and Jill Stewart, Philip Singer Distinguished Professor in the Gillings School’s Department of Environment and Engineering. Their research contributes to UNC’s leadership in the sustainable development goal (SDG) of the United Nations (UN) for water and sanitation.

Poor sanitation is linked to a number of transmitted diseases – including cholera, diarrhea, dysentery, hepatitis A, typhoid and polio – affecting more than 2.2 billion people annually.

The World Health Organization (WHO) and UNICEF provide government officials around the world with standardized guidelines, flow models and approaches to safely manage sanitation services, but these resources are not always straightforward and may not prioritize safety in public health terms.

“The most widely used diagram – known as the Shit Flow Diagram – tracks ‘safely managed’ versus ‘not safely managed’ sanitation systems by percentage indicators that are unclear, ambiguous and sometimes misleading,” said Manga, whose 15 years of practical experience as a public health engineer informs his research. “My team and I believe we have an improvement on this diagram that may be a lot closer to the truth, and therefore more useful.”

Manga and his team are tracking a more relevant indicator of potential risk to public health: the number and types of fecal pathogens – bacteria, viruses or other microorganisms that can cause disease – released by different sanitation technologies.

Their findings are upending much of what we thought we knew about safe sanitation practices.