Terry Rhodes Named Dean of the College of Arts and Sciences 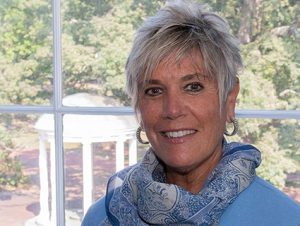 Terry Rhodes has been named dean of the College of Arts and Sciences, effective March 1, Chancellor Kevin M. Guskiewicz and Executive Vice Chancellor and Provost Robert A. Blouin announced February 28, 2020.

“Terry has been an inspiring and strategic leader in the College for many years and has effectively led as interim dean this past year,” Guskiewicz said. “She has long been a champion for diversity, interdisciplinary collaborations and bridging silos. Terry is truly ‘a Tar Heel born and bred,’ with a deep abiding love for Carolina, and she will bring continued success to the College.”

Rhodes has served as interim dean of the College since February 2019, when then-Dean Guskiewicz was appointed interim chancellor, and more recently, chancellor, of Carolina.

“Terry’s longstanding leadership has been instrumental in creating a strengthened sense of community, enhanced student experience and expanded academic offerings in the College,” Guskiewicz said. “Her appointment allows us to continue our momentum, including the implementation of the new curriculum and fundraising for the campaign.”

“I’m deeply honored to be following in Kevin’s footsteps as dean,” said Rhodes. “The College is where students come to get an arts and sciences education that is both broad and deep. They inspire us with their dreams and their determination. Our faculty are world-class, our staff unrivaled in their dedication to this place. The College may be Carolina’s oldest school, but we are firmly focused on the future and all that we can accomplish by working together.”

During her time as interim dean, she has introduced key initiatives to increase the dialogue around important issues including:

Rhodes has also supported implementation of IDEAs in Action, the new general education curriculum for the University. It goes into effect in fall 2021 and core concepts are being pilot-tested now.

Since Rhodes began her tenure as interim dean, the College has raised more than $122 million in For All Kind: The Campaign for Carolina, including a $25 million bequest for graduate student support, a $5 million bequest to endow the producing artistic director position at PlayMakers Repertory Company and a $3.2 million gift to support student learning opportunities through Honors Carolina.

Rhodes is the first faculty member from the fine arts to be named dean of the College since it took its modern-day name in 1935. Prior to being named interim dean, she served for seven years as senior associate dean for fine arts and humanities in the College.

Rhodes is a Carolina alumna and proud Carolina parent. She joined the faculty in 1987 and has served the University in a variety of roles, including as a member of the voice faculty, UNC Opera Director, chair of the music department and Faculty Marshal.

She earned a bachelor of music degree from Carolina in 1978 and her doctor of musical arts and master of music degrees from Eastman School of Music at the University of Rochester in New York. She was a Fulbright artist-in-residence/lecturer at the Conservatory of Music in Skopje, Macedonia, in 1993, teaching and performing throughout the Balkans and Eastern Europe. For the past 15 years, she has returned regularly to Spoleto, Italy, to instruct and perform. She has an excellent reputation as a performer of new works, having presented numerous premieres at home and abroad. She has performed across the United States and in more than 20 countries throughout Europe and Central and South America.