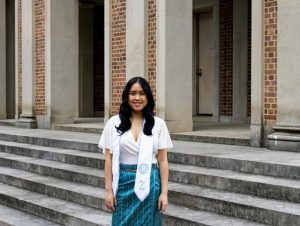 Senior April Bourommavong is a first-generation student who co-founded the Southeast Asian Student Association during her time at Carolina.

April Bourommavong’s parents both left their homeland in Laos in the 1980s as young adults, living in different United States cities before settling in Charlotte (where they met, fell in love and married). They raised their daughter to be community-oriented.

“There was a large Lao community in Charlotte that they had a part in building. Even though they were far from home, they were able to make the most of their new environment,” said Bourommavong, a sociology and global studies major.

In an international migration course taught this semester by Kenan Distinguished Professor of Sociology Jacqueline Hagan, Bourommavong was able to examine her parents’ migration to the United States through an academic lens — and to document their personal journey.

“There were so many times in their lives when things were against the odds,” said Bourommavong, who is also pursuing a health and society minor. “Growing up, I heard fun stories from my mom about her first meal at a fast food restaurant, silly things like that. But now that I’m older, she shared with me that she sometimes felt discouraged. To hear that there were times when she didn’t feel as strong was really eye-opening to me.”

During her time at Carolina, Bourommavong served as an event assistant at the Carolina Asia Center, where she helped set up spaces for lectures and enjoyed participating in cultural festivals and movie screenings. When she and her friends found out there was not an organization on campus serving students of Southeast Asian backgrounds, she co-founded the Southeast Asian Student Association. She has also served as co-culinary chair for the Vietnamese Student Association, using her cooking skills as a welcome outlet. And she served on the student advisory board for the Asian American Center, which opened virtually on campus this fall under the leadership of Heidi Kim, associate professor of English and comparative literature.

Today, as part of the Southeast Asian Student Association board, she and other members have continued to meet and plan activities online amid the global pandemic. Technology has allowed them to make connections with other schools along the East Coast that serve Southeast Asian students.

Her sister, Monica, became the first in their family to graduate from college when she pursued global studies and anthropology majors at Carolina and graduated in 2015. She’s now a graduate student in cultural studies in education at the University of Texas at Austin.

Bourommavong said she chose Carolina because her sister felt comfortable with the resources offered to first-generation students.

“I wanted a school that recognizes first-generation students and our needs,” she said. “It feels good knowing that people acknowledge that I might be going through something different, and that they’re willing to help me through that.”

She said she misses the traditions that normally would have been a part of her senior year on campus. She prefers the interactions and conversations that happen easily with in-person classes, and she was holding off on attending a basketball game until her senior year.

Bourommavong is taking time off before her next big step after winter graduation. For the longest time, that next step was law school, but now she’s considering graduate school in social work or public health.

“I’m proud of who I am today, and Carolina has played a part in that,” she said. “I want to focus on serving underrepresented and immigrant communities, similar to my own. Whatever I choose to do — that’s my ultimate goal.”

We asked Bourommavong some fun questions about her time at Carolina.

Carolina on My Mind

A lot of what I learned in SOCI 172 with professor (Robert) Hummer resonated with my personal experiences and made me want to spend my time at UNC learning more about the various ways society shapes individuals’ health.

The bottom floor of Carroll Hall.

Local restaurant or hangout you’ll miss the most?

Lime & Basil has a special place in my heart because I went there whenever I was feeling homesick and missed my mom’s homemade pho.

Seek your own definition of success.

How would you say goodbye to UNC — in a Tweet?

UNC gave me the opportunity to grow in ways that I never could have imagined and while my time on campus was cut short, I am excited to take everything I have learned with me on my journey forward.