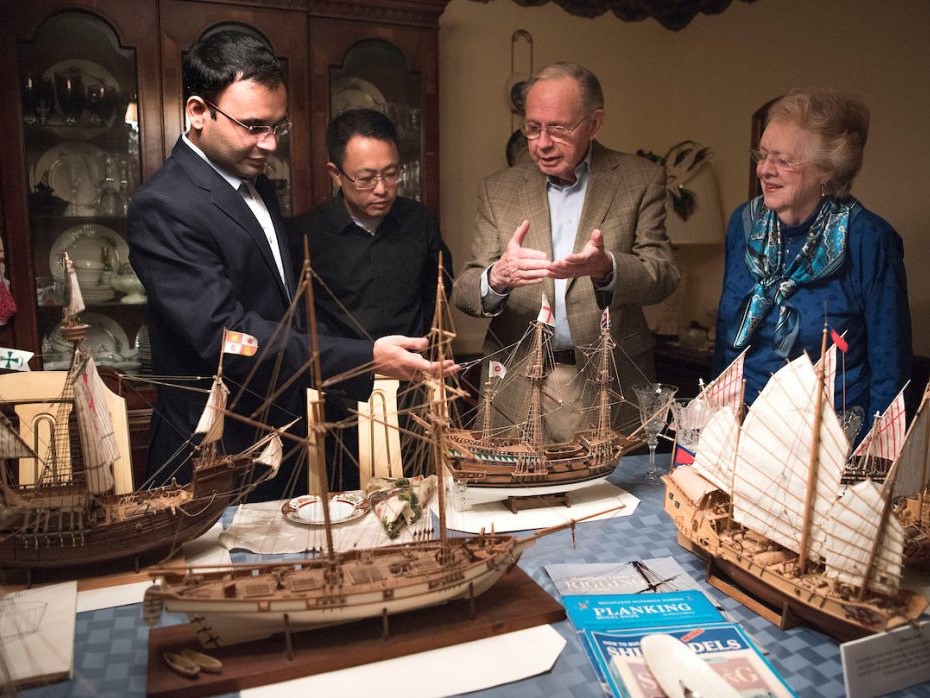 Visiting scholars Sathish Raja, far left, and Jinsong Pan with their retired faculty mentor Bobbie Lubker as her husband Lynn describes ship models that he builds as a hobby.

When Sathish Raja met Bobbie Lubker, former associate professor at the University of North Carolina at Chapel Hill, and her husband Lynn, he never imagined how strong their relationship would grow.

“We’ve become close friends, more like a family,’’ said Raja, a post-doctoral research associate in the Department of Biology in the College of Arts and Sciences. “It’s something I never expected.

Last year, Raja, of Bangalore, India, and dental researcher Jinsong Pan, of Shanghai, China, met the Lubkers through the Academic Retirees as Liaisons for International Scholars (ARLIS) — a new program organized by Carolina’s Retired Faculty Association (RFA) that pairs former faculty with scholars coming to campus from other countries. While the program’s intent is largely to assist the scholars with acclimation to campus life and American culture, the overriding result can be a feeling of a home away from home for the scholars.

Carolina has wonderful student programs, she said, but there was an opportunity for retired faculty to do more to support post-doctoral students, visiting faculty and other scholars.

So Lubker contacted Elizabeth Barnum, director of Carolina’s International Student and Scholar Services. They sent an email to RFA members seeking mentors, and more than 25 members — including a former dean, faculty members, researchers and a past chair of the faculty — volunteered for the initial 12 mentor spots.

When they invited international scholars to apply to participate, 56 responded. The selected scholars and retired faculty mentors were matched at a reception in spring 2016, with some RFA mentors working with multiple scholars.

Barnum said the matches were made, in some cases, with shared interests or research expertise in mind. They also considered factors such as how relationships could span from professional, scholarly support for younger scholars to a more collegial relationship for older scholars.

Through the mentors, professional support can include:

Raja, 29, who also lived in Germany and England, said the program has broadened his thinking: “Before coming to the U.S., my thoughts were that Americans always move fast forward with no time for cultural activities or family. I met Bobbie and Lynn, and those stereotypical thoughts were totally shattered.”

After the program’s first few months, ARLIS is evaluating ways to make the program even better.

“Scholars all say that the most rewarding part has been relationships, not just with their faculty friend, but with the other scholars they’ve met. Many find themselves in an American home for the first time, but they’ve also gotten to know scholars from other countries. And they rely on each other.”